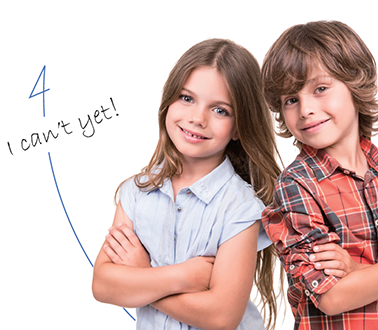 Not Yet vs. Not Ever: A Difference of Mindsets

A passion for learning isn’t always an inborn characteristic. Wanting to always seek out new challenges and push yourself to grow is linked to something called a “growth mindset”. This term was coined by Carol Dweck, a professor of psychology at Stanford University, who has conducted research based on tens of thousands of students. In her research on education, Dweck outlines how one might move from the more common “fixed mindset” toward a “growth mindset” which allows people to maximize their potential.

What is a “Fixed Mindset”?

The fixed mindset is a characteristic that thrives in our society. Those who have it often carry the personal mantra of “I could never”.
This means they put themselves into a box of attainable skills and decide that the outside is simply a dream. When met with a challenge, someone with this mindset will shy away, afraid of being called stupid by their peers or showing signs of failure to their parents. When others succeed where they have failed, they look at them with jealousy.
All in all, their focus is on the now. Rewards must be immediate – at the end of the school day or workday. Success often comes through the use of inborn talent and intelligence. Through depending on those things, growth over time becomes very difficult. Failure leads to avoidance.

What is a “Growth Mindset”?

The growth mindset is, ironically, a growing characteristic in our society. Those who have such a mindset can be characterized by a desire to actively seek out challenges and work to eventually be able to overcome them. They have the personal mantra of “I can’t yet”.
Rather than being placed into a box of possibilities, they are placed into an ever-expanding space of personal potential. Challenges are opportunities for growth and learning. When others succeed where they have failed, they see these people as an inspiration, a potential mentor even.
Their focus is on the power of “yet” – the idea that through perseverance and sustained learning, the unachieved can become achievable. Rewards are long-term; they are ideas of what can “yet” be achieved. Success comes from effort, strategy, and everyday progress. This mindset nurtures a passion for lifelong learning and maximizes individual potential. Failure leads to growth. 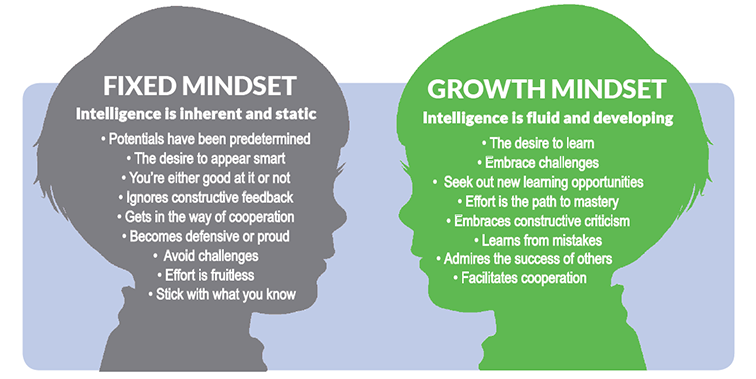 Creating a growth mindset isn’t simply up to the individual pushing themselves out of their comfort zone. One of the ways that such a mindset can be gained and its benefits experienced is through the active encouragement of parents.
Saying a kid is “smart” when they succeed is often people’s go-to type of praise. But doing so has the unintended consequence of making the praised individual feel vulnerable. To them, failure becomes an attack on their intellect and makes them stupid. Being called smart and being praised for being “smart” puts an individual into a box and onto a pedestal. Going forward they do everything they can to maintain their spot on that pedestal, even if it means backing away from challenges. Praise for being “smart” teaches that the most important thing is to keep looking smart.
When praised talent fails someone with a fixed mindset, they aren’t sure of how to improve. They are lacking the educational building blocks and motivations to head in the direction of “not yet”; all they see is “not now”, which to their mindset means “not ever”.
On the other hand, praising kids for the process of learning that they engage in, such as their hard work, strategies, and focus, makes them realize that failure is just a matter of “not yet”. Through continuing to build on these skills, failure can be turned into a lesson and a success. This helps generate perseverance and more sustained learning.

In addition to adhering to the same type of praise that comes from the kids’ parents, educators can create an environment of “yet”. This helps transform the meaning of difficulty from an issue of “being dumb” (fixed mindset) to a “chance to get smarter” (growth mindset). Educators should teach in a way that makes students love learning, love challenges and know how to stick to them until they can be overcome. An environment that allows students to feel the thrill of improvement. It is a matter of teaching for the love of learning versus teaching for just another A+.