Avoiding After the Flood 大水過後

First of all, I want to thank the documentary ”  Before the Flood” for giving me the inspiration for this article.

What will it mean?

Climate change will mean a lot of things for our country and ultimately the whole world. Climate change will cause the Polar Ice Caps to melt and will cause the weather to change rapidly. Storms will be stronger and more abundant.
A big problem is the fact that the Arctic will melt, or start to melt. The Arctic is just frozen water, so when it thaws, problems occur. First of all, it’ll cause the sea levels to rise. The sea will flood many coastal cities and islands, like our country. Not only that, it’ll also flood other coastal cities like Miami, San Francisco, and many Pacific Islands. The most recent example is happening in Miami. The streets are flooded, even today. Climate change is coming sooner than we all anticipated. Miami is already looking a little like Venice in Italy, where boats are the main transportation. 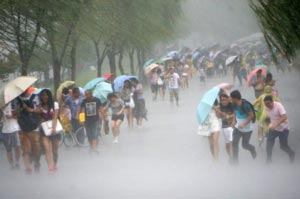 Not only that, it’ll also cause the endangerment of many animal species. The most obvious one is the polar bear. These bears rely on ice floatsto hunt and take a rest from swimming to hunt. Without them, polar bears die from exhaustion and starvation. However, polar bears are only one of the species that are negatively impacted. Seals like ring seals, harp seals, and spotted seals are affected too. Whales, walruses, ivorygulls, and little auks are also affected by this catastrophe.
Storms will also be a problem. Climate change will mean that storms will be stronger and arrive at an alarming frequency. It might soon become a part of everyday life. We can feel it in Taiwan alone. Storms will be stronger, in fact we’ve lived through a typhoon that made history!Typhoon Megi was the strongest typhoon since 1977 to hit Taiwan. It had wind speeds up to 120 miles per hour and rained up to 40 inches. They will also be more common. Here’s an example: In the space of about 1 ½ months, four strong typhoons came to Taiwan. They were Typhoon Megi, Meranti, Malakas, and Nepartak.

What can we, and countries, do?

So climate change is definitely a problem. But what can we, and other countries, do to stop or delay it?
The fastest way is by changing your diet. Surprisingly, this can help a lot, and it’s a simple thing to do. We need to cut the amount of beef we eat every day. Cows and cattle are a major problem for the environment. Not only is it expensive, it’s just plain awful. Cows eruct “Methane, the gas produced extensively by the livestock industry worldwide, which traps up to 100 times more heat in the atmosphere than carbon dioxide within a 5 year period,” says One Green Planet. Even though methane only accounts for 9% of the greenhouse gases, it is proportionally more harmful than others.
Another way to reduce your carbon footprint is to save energy. Most of the energy we use comes from fossil fuels, which emit carbon dioxide. In the US, carbon dioxide is 70% of all greenhouse gas emissions. You can do this by turning off lights when you don’t need them. You can also turn off the air conditioning. Fans are a far better more energy efficient alternative.
Countries can also do things, but on a far larger scale. First of all, they can preserve and plant trees. Trees help absorb CO2 and release helpful oxygen. They can make a difference. In Indonesia, forests are being cut down for palm oil used in Doritos and other big corporations that use cheap oil. This means you should also stop eating those. More surprisingly though, cutting down trees actually releases carbon dioxide. Just cutting down trees alone release an astounding 15% of carbon dioxide emissions.
Countries can also help by making laws about garbage dealing and energy usage. Some people refuse to care about climate change, so sometimes you have to force them to. People still burn garbage, which is disastrous. It can release countless different gases that trap in heat and change the climate.
So what are you waiting for? Turn off that air conditioning and take some action!